I’d be honest that I wanted to visit Busan because of the movie “Train to Busan”, which I didn’t even watch. Hahahaha. Such a shallow introduction but 100% true. We spent a total of 48 hours in Busan and honestly I think it’s just right.

If you’re thinking of heading to Busan during your visit to South Korea, here’s a list of what we’ve tried in 48 hours 😉 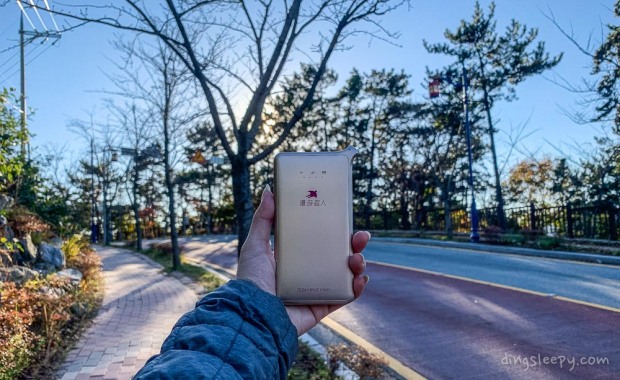 When we were in Busan, we decided not to drive as public buses were more frequent there. Navigating around in Busan was not difficult, especially when we were connected with Roaming Man SG’s wifi router. Their connection was smooth and fast. We had 2 phones connected to it during the entire trip and we even managed to play online games without lag!

According to our accommodation receptionist, Busan is known for their Pork Soup and they have an entire street selling sliced pork soup in Somyeon area. Which was exactly where we went hehe. Sets usually come with a rice, and piping hot soup in winter sounds like the perfect meal. We got ours at Bupo Pork Rice Soup (돼지국밥) because of its huge dianping.com banner outside – so shallow once again hahaha. 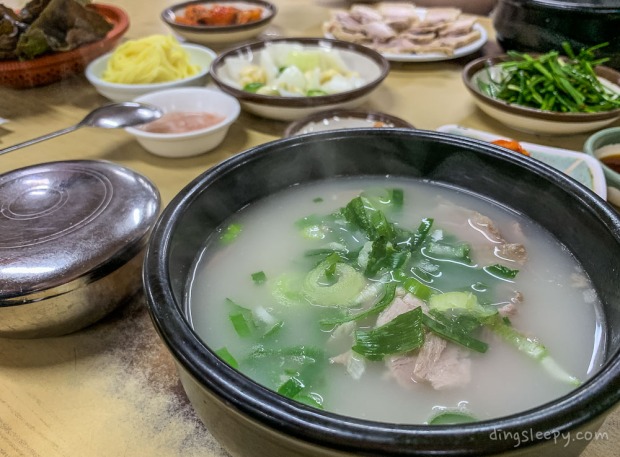 Thankfully we did not need to wait very long before the ahjummas wheeled our meat soups to our table. The pork soup servings were huge. We got ourselves 2 different sets – one tender pork set and one regular pork set. Sides were served as usual and refillable. Yay more kimchi!

The regular pork soup set had so many pork slices, it felt as if I could never finish them (and I did not manage eventually). Pork slices from the soup were thin like the shabu slices from a Cold Storage. They weren’t marinated and tasted rather mediocre. The soup tasted pretty normal as well haha.

The tender pork soup came with thicker pork slices that were separated from the soup. They were really more meaty and tender, and at the same time more fatty. My verdict: nothing really special about it but definitely something to have during winter.

However, when we got back, our accommodation receptionist actually recommended the shop right beside: Songjung Pork Soup (송정3대국밥). Nuuuuuuuuuuu – Please try it and let me know if it’s good.

The shop front was not particularly eye catching but their knife cut noodles was the bomb.

Really in love with the texture of the noodles – super q (chewy). Although I would have liked it better with more liao (ingredients), it was a truly satisfying meal. This was also the first restaurant that served us barley tea haha. As usual, the serving was huge!

We also tried kimbap from this restaurant but I didn’t think it was particularly tasty. Would choose to have any of the flavours sold in 7eleven or GS25 over their kimbap.

On our way to Haeundae Beach, we chanced upon this huge fish cake store. This was really fishcake heaven. The experience was a little like buying bread from a bakery – just pick up a pair of tongs and a tray, and take pieces from their fishcake shelves. We got ourselves cheese fishcake, crab meat fishcake, etc

I’m not sure if all shops are self service like them, as we were directed to microwave our own fishcakes after payment. Feels a little like 7eleven fast food haha.

They also have noodles and soups to go with your fishcakes if you’re really hungry (or want a proper meal). I did not try it though – just ate another roll of kimbap.

Marvelled at the amount of live seafood that this market had as we strolled down rows of seafood tanks and pushy vendors.

The market was not super huge, but the collective amount of live seafood they had were like remarkable?!?! It’s like all the edible animals in the ocean were there?? For ultimate fresh seafood junkies, this is definitely the go to place. You could purchase live seafood here and bring them upstairs to be cooked for a small fee. 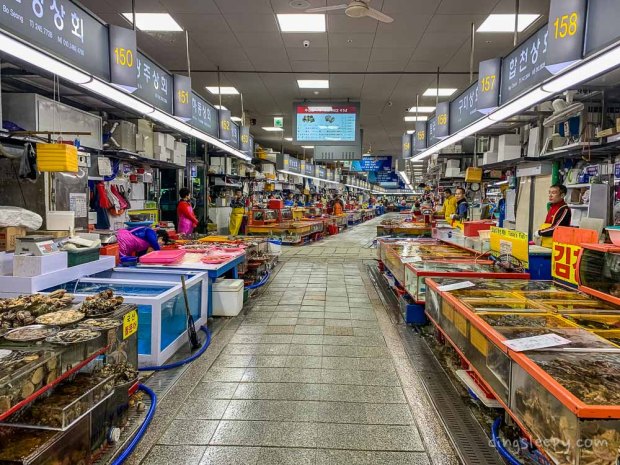 However, I was always skeptical on whether my live seafood would be swopped HAHHAh so I didn’t get them. Plus, it’s a little too cruel for me to take…  J really wanted to try the live octopus dish (the popular one online with the wiggling octopus legs in sauce), but I wasn’t game for it that day so we opted for a piping hot seafood stew with some side dishes 😛

Do expect prices to be higher than usual and portion sizes to be Asian small. And since it’s a whole level of restaurants that offer the same service and menu (LIKE WHY DO THEY HAVE A STANDARDISED MENU?!), a little comparison goes a long way. You may also wish to consider the crowd that the restaurant was attracting too.

5) Enjoy Freshly Made Hotteok from night markets near BIFF Square

Hotteoks are one of the most common street foods you can find in South Korea. They typically have sweet cores (even though I’ve tried one with a savoury core in Seoul). As you sink your teeth into a hotteok, the crisp exterior will give way to a chewy skin (a little like mochi) and then the brown sugar core.

Be warned though that the cores may be lava hot, especially if they were just prepared.

There were 2 stalls beside each other in BIFF Square when I visited, and of course, I had to try hotteok from both stalls haha. Both stalls took turns to have snaking queues and don’t be shocked when the ahjumma pulls you to join the queue from her stall.

I loved how both stalls used butter to fry the hotteok, before opening them up and stuffing a whole lot of nut mix and more sugar in. The ahjummas worked at lightning speed, so I only waited a few minutes even though there were 7 people in front of me.

Of course, one stall tasted better than the other. This stall had a thicker skin – a little like kueh texture:

I personally prefer the other one (but I forgot to snap a photo of their stall nuuuuuu).

Last but not least, that Korean restaurant in Singapore. 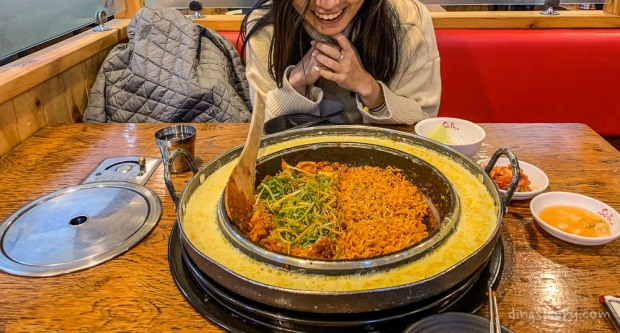 Yoogane felt a lot like fast food in Korea and their prices (HALF PRICE!) and serving sizes were unbeatable. Be warned though that the outlets in Singapore will never feel the same again… I’ve recently had lunch at the Westgate outlet and it was really disappointing in comparison.

Yoogane in Korea offers a more extensive range of food too! I could vividly remember the honey soy sauce chicken option which we tried when we were in Seoul. Yummy!

That’s about all the yummy finds within 48 hours in Busan!

We were so thankful to be connected with Roaming Man SG – navigating in Busan was easy! Furthermore, the battery life of their router is amazing, lasting more than 10 hours with every overnight charge. Roaming Man SG also has free delivery and collection of their routers so you don’t have to worry about forgetting to collect them before your trip.

Have you been to Busan? Do share with me your interesting food finds in the comments below!