While free and easy trips give me all the freedom to swop my scheduled itinerary or lengthen visiting timings for certain areas, it can get a little tiring to plan the transportation routes (especially if there are certain trains to catch) and those small details like where to get lunch and opening hours of every attraction. As such, on lazier days, I would sign up for all-inclusive packages from “experience providers” such as Klook or KKday. There are quite a few online, feel free to compare away! 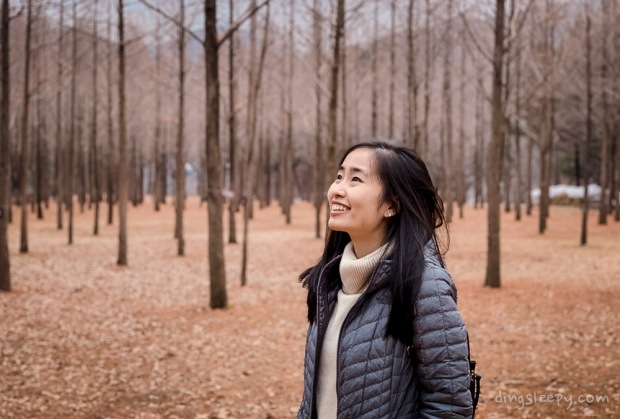 When researching for day trips out of Seoul, Nami Island showed up quite a bit – popularised by Korean drama Winter Sonata. And… we decided to hop on this bandwagon and have a day trip to Nami Island, Petite France and experience rail biking at the Gangchon Rail Park.

We signed up for an all-inclusive tour and  met super early at Myeongdong Station (7.45am) for the guide. According to our guide, the order of each stop may differ for every tour. Ours was in this order:  Gangchon Rail Park – Nami Island – Petite France. 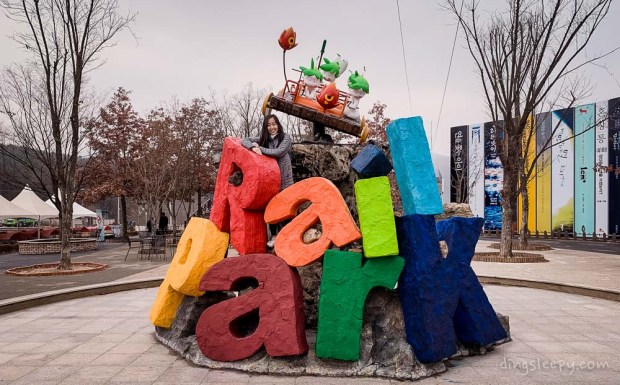 Our first stop was the Gangchon Rail Park, J and I went for the 2-seater bikes because we felt that it would be really awkward to share the 4-seater with strangers. The bike was easy to peddle and not strenuous for us. Coupled with awesome scenery, I think this was a pretty good experience!! We pedalled around 5.5km, followed by a train to the pick up point. 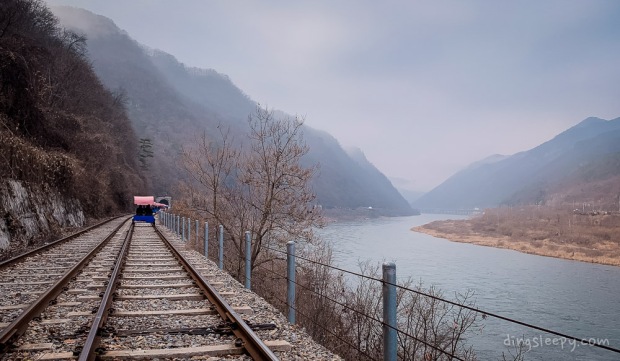 Once I put on the VR goggles, the surroundings turned into a magical garden, and later into a larva mountain. While the visuals were cartoonish, I could really feel my heart thumping at the parts where the track “broke”. I even took out the goggles at the rollercoaster drops that were too much for me to take. I’m no fan of roller coasters.

As this VR section is optional, for those who opted not to try the VR, the tunnel flashes with lights and great music too. My take? Go for the VR.

The only part that I didn’t quite enjoy was the fact that no overtaking was allowed, so if the bikers in front of you were travelling at walking speed, there’s absolutely nothing you could do about it. At all. Hence, if you’re thinking of powering through, do try to choose bikes that are positioned in front. We were stuck in the middle of the rail bikes train.

Also, as it was already approaching winter in end November, it was insanely cold when cruising through the rails. My toes felt numb after the ride – I was wearing regular sneakers and normal socks haha asking for it. Still a great experience nonetheless!

Lunch was pre-arranged together with the day trip package. The meal choice was also fixed – stir fried chicken and vegetarian fried rice for vegetarians. 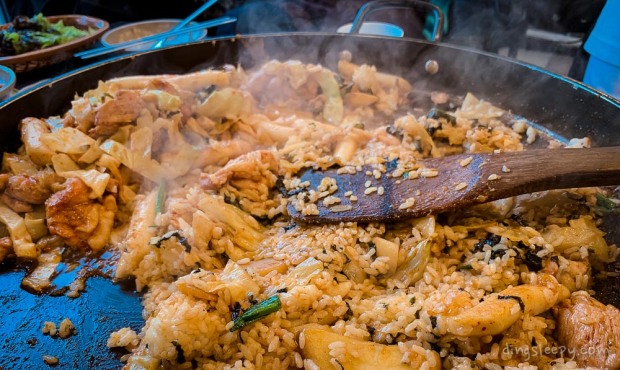 We were made to share tables with another couple as the guide insisted that everyone had to form tables of four. It was slightly awkward but I guess it’s always easy to strike a conversation over some food. 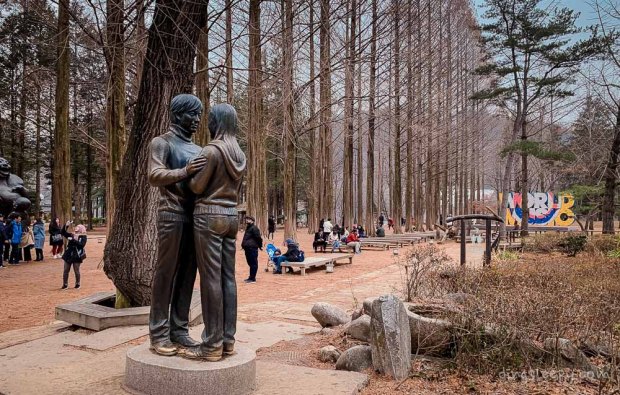 Do not be alarmed when you see gates that ask for your “Visa” to Nami Island. It’s actually just asking for your entrance ticket (no passports needed). There are  2 different ways to get to the island – zip line or a 10 minute ferry ride.

Although we were so tempted to try the zip line, the thought of more wind sending chills to our spines (literally), got us choosing the conventional ferry instead. The cabin of the ferry was heated too #anythingforwarmth The ferry ride was stable and the journey smooth. I did not even realise that it departed from the dock and later when everyone started to squeeze forward, I knew that we arrived. Each boat can take about 350 people and the journey takes around 10 minutes. Ferries were quite frequent so you don’t have to worry if you really can’t squeeze onto one. 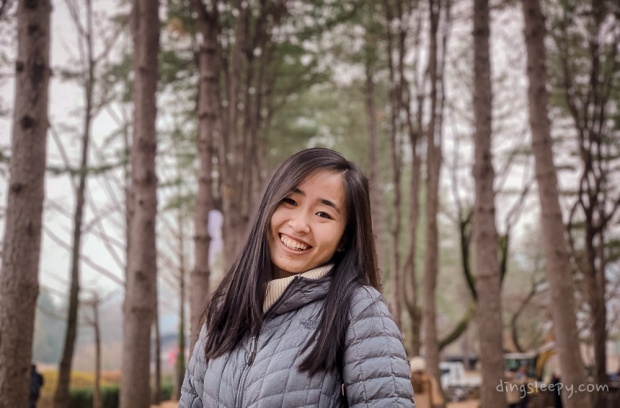 As we went to the island in the afternoon, the island itself was filled with soooooo many tourists, it’s almost impossible to get that winter sonata shot with the two neat lines of trees. You’ll stand a chance if you stray away from the main pathway. 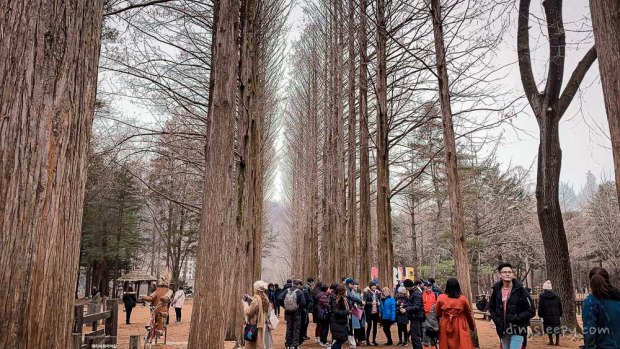 I was a little late to catch autumn, so I’ll make do with barren trees Hahahaha. There’s also an ostrich enclosure in there, as well as the winter sonata statue.

We were given less than an hour on the island to explore, which I felt was wayyyyy to short?! Perhaps a 2 to 3 hour block would be more reasonable to cover the island at a relaxing pace. Do plan sufficient time to cover Nami Island if you’re here on your own!

The last stop was Petite France, and to be honest, I didn’t quite enjoy this French cultural village. The area was rather small, easily covered in an hour. 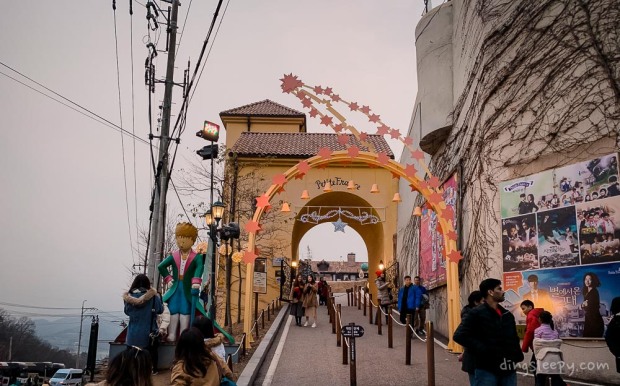 There were small museums scattered around – musical instruments, dolls, plates, etc. To be fair, the buildings and exhibits were  beautifully done up and if you haven’t been to France before, this may be an interesting place to learn about the French culture or for all your #ootd s. There were also free performances in Petite France throughout the day. 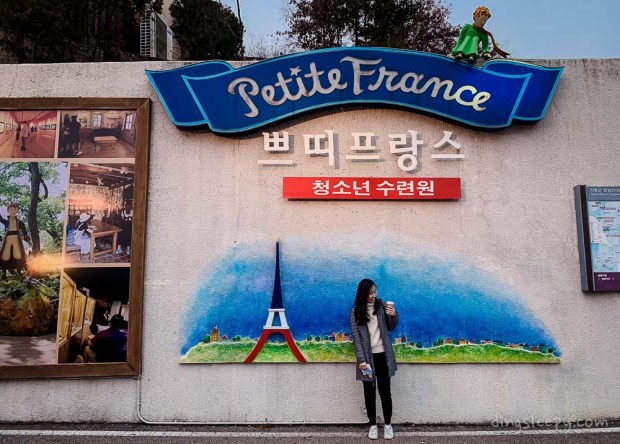 Unfortunately, it wasn’t really my thing… and on our way out we saw the stamps booth (similar to the stamping activity we participated in when we were at the Gamcheon Cultural Village in Busan). 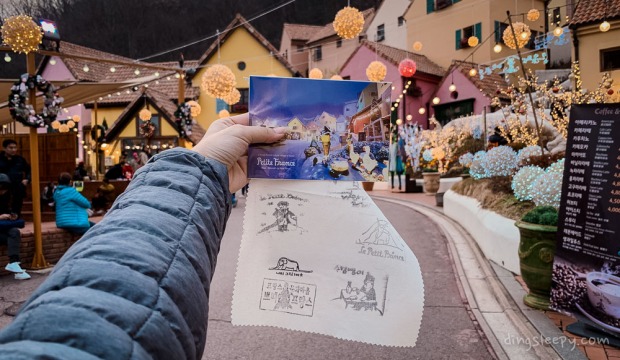 After paying KRW 500 (around 0.60 SGD) for a piece of white cloth at the ticketing counter, we went in search of stamps around the area. Unlike the one in Busan, the map of Petite France did not have the location of the stamps, so it was really intriguing to look for them. Upon collection of more than 5 stamps, we headed back to the counter to get our prize – 2 postcards. So, if you have friends that really want to visit Petite France, but you don’t, and for whatever sad reason you end up there haha this stamping activity will keep you occupied. We took around 20 minutes to collect 7 stamps.

The all-inclusive tour we signed up for cost around 85 SGD per pax (lunch inclusive, a few locations pick up and after-tour drop off at Myeongdong or Seoul Station). While it may have been cheaper if we had planned it ourselves, it would only be fair if the ease of travel and booking was factored into the package price 🙂

Which is your favourite stop? Do share with me in the comments below. 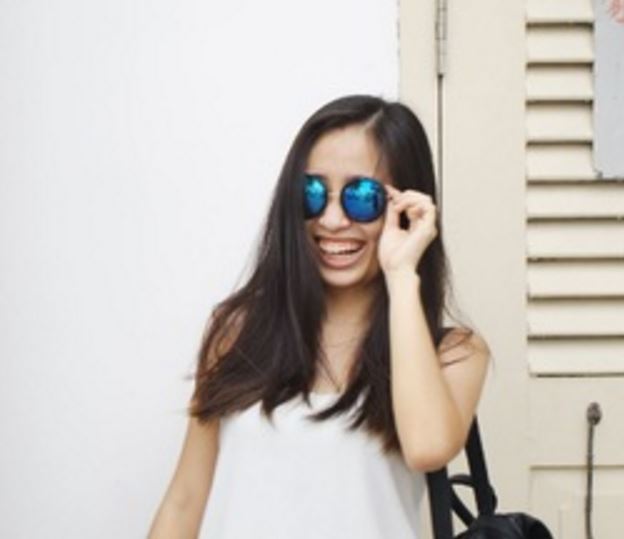